Distribution and Biomass of Plankton in Howe Sound/Átl’ḵa7tsem 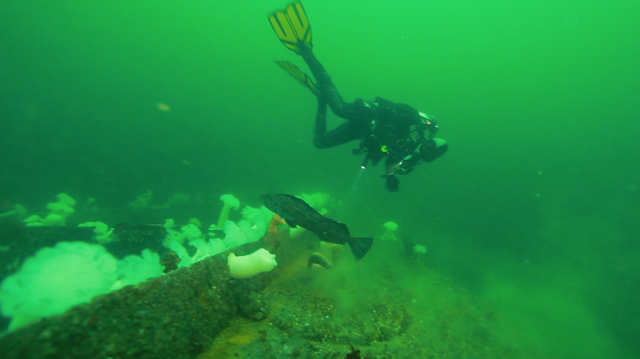 Plankton forms the base of the food web in Howe Sound, British Columbia and is an excellent indicator of ecosystem health. The main objectives of this project is to research; 1) the seasonal distribution of phytoplankton, 2) the seasonal distribution of zooplankton, 3) factors influencing phytoplankton production, 4) impacts of natural and man-induced stressors on phytoplankton and 5) changes between this study and the Stockner et al. (1972) study. Over the past fifty years, the Sound has experienced extensive changes in its biological, chemical and physical oceanographic systems. In particular, the past 15 years have seen a reduction and remediation of industrial impacts, which has likely contributed to an increased abundance of cetaceans, pinnipeds, and forage fish in the Sound. Given these changes, we expect the phytoplankton and zooplankton biomasses to have increased since the baseline 1972 study (Stockner et al.). This research proposal is developed as part of the Howe Sound/ Átl’ḵa7tsem Marine Reference Guide with collaboration from the Pacific Salmon Foundation and the Plankton Ecology group at IOS, Fisheries and Oceans Canada. This project is part of an overarching mission to protect and restore ocean health in Howe Sound/ Átl’ḵa7tsem, within the Squamish Nation’s traditional territory.

Why is plankton important?

Plankton plays a critical ecological role by forming the base of marine food webs. Since phytoplankton regulate our atmosphere by sequestering about 25% of the world’s carbon dioxide (NOAA, 2019), changes in the distribution and abundances of these organisms can have significant impacts on the Earth’s climate and biogeochemical systems. Phytoplankton play key roles in biological carbon fixation and nutrient cycling for key elements including nitrogen, iron and silica. Given these processes, studying phytoplankton ecology can improve our understanding of how regional nutrient cycles and carbon sequestration are related to global climate change. Zooplankton are extremely important in marine food webs as well as they link the lower trophic levels (i.e phytoplankton) to secondary and tertiary consumers (i.e. invertebrates and fish) (Johnson et al, 2011). Accordingly, changes in zooplankton assemblages can potentially create cascading effects on the marine food web.

What biological oceanographic research has been completed in Howe Sound?

Plankton creates more than half of the air we breathe and is critical for maintaining a flourishing and sustainable ecosystem. In the Oceanwatch Howe Sound Edition (2017), the Coastal Ocean Research Institute (CORI) stated that plankton has limited data in the Howe Sound and that the last extensive plankton study was done in 1972. In Phytoplankton Production and Distribution in Howe Sound, British Columbia: A Coastal Marine Embayment-Fjord Under Stress (Stockner et al 1972), the phytoplankton production rate, biomass and distribution was measured over two years in Howe Sound. This report focused on man-induced and natural factors that affect light attenuation in the Sound’s surface layer. Their study also identified the dominant species of phytoplankton during spring blooms and changes in the timing of the spring blooms. The Howe Sound CORI report states that a satellite sensor, no longer in operation, called MERIS, was used for the Sound to sense changes in water colour showing phytoplankton blooms.

How has Howe Sound changed since the 1970s?

Over the past century, there has been a boom of industrial development, pollution and anthropogenic stressors in the Sound. Howe Sound has supported two pulp mills, foreshore log booms, gravel washing operations, the Britannia copper mine and the Squamish terminals. Even though the Britannia copper mine held to the environmental regulations of its time, it was the greatest point source of metal pollution in Canada until 2005 (McCandless, 2016). In the 1970s and 80s, the Britannia mine allowed copper and other metal mine tailings to be discharged into the Sound. Gravel washing discharge and log-boom storage reduced light penetration in the Sound harming the habitat quality for phytoplankton and other estuarine plants. Since the 1970s, however, industrial activities in Howe Sound have subsided and remediation efforts have been implemented to address water and habitat quality.

Why is plankton a good biological indicator?

Over the past few decades, the recovery of whales, dolphins, herring and larger organisms in the Sound and are an indicator that plankton may also be recovering. However, this has yet to be confirmed by empirical studies. Tracking biological indicators is an important step toward determining the health of aquatic environments (Cantin, 2011). Understanding marine ecosystem health in turn provides a foundation to assess cumulative anthropogenic impacts and develop mitigation techniques. Regular monitoring is required to see the changes in productivity and abundance of phytoplankton and zooplankton.

This study will be completed in Howe Sound, an inlet of the Salish Sea. The Sound is strongly affected by all the rivers and streams flowing into and around it, including but not restricted to the Fraser River and the glacially fed Squamish river. The Sound has been inhabited by the Squamish Nation for 9800 years and is approximately 60 km from the bustling city of Vancouver. The uniquely wild Howe Sound area provides a playground to climbers, bikers, kiteboarders, hikers and paddlers alike.

The full-scale project will begin January 2021 and end December 2021, giving the project a full year to collect oceanographic data in the Sound in partnership with the Pacific Salmon Foundation and the Plankton Ecology group at IOS, Fisheries and Oceans Canada. Annual growth activity of phytoplankton and zooplankton in pelagic systems can be identified by studying the spring and fall blooms (Smayda, 1997). As spring begins, the increased temperature, solar radiation, and thermal stratification drives blooms in phytoplankton abundance and biomass (Cushing, 1959). After a lag, there is typically a zooplankton bloom as they graze on the phytoplankton. These biomass peaks usually remain for a few weeks to months until nutrient limitation collapses the blooms (Sommer et al. 1986). In late summer or fall, a fall bloom of phytoplankton and zooplankton can occur due to excess nutrients in the water (Sommer et al. 1986). However, annual phytoplankton and zooplankton patterns can greatly differ depending on the ecosystem and the year (Cloern & Jassby, 2008). Using wavelet analysis to extract periodic components from phytoplankton time series (Winder & Cloern, 2010) from Stockner et al (1972) we can determine when to sample in the Sound so as to get a better understanding of the changes in plankton biomass. Based of the results of Stockner et al (1972) and recent studies from the Pacific Salmon Foundation, we recommend that samples are taken in January, mid March, mid April, August and October to get an accurate representation of the spring and fall blooms of phytoplankton and zooplankton. 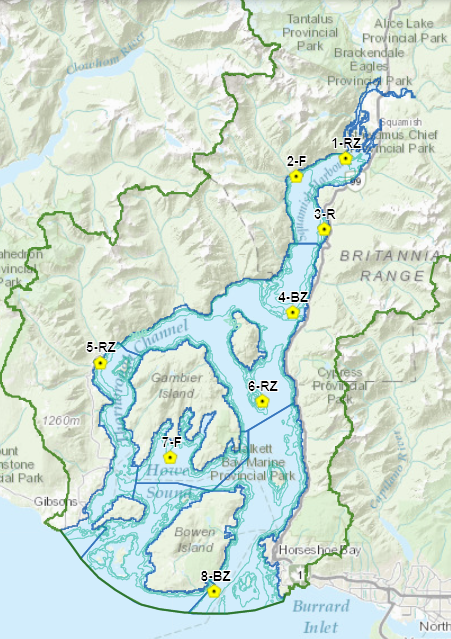 This survey will include standard physical, chemical; nutrients and oxygen, and biological; dominant species, phytoplankton and zooplankton biomass, and primary productivity data as recommended by CORI (2017).

Biological samples will be collected at each sample location using phytoplankton and zooplankton net tows, and sieves to size fractionate the plankton. The nets will be deployed using a wire and pulley system. As in Stockner et al (1972), we will sample from 1m and 5m depths with a phytoplankton net tow (mesh size 64μm). We will assess species composition, dominance of major taxa, and phytoplankton volumes during the spring and fall bloom period. We will conduct vertical zooplankton hauls from depth to surface at each station with a net of 57cm in diameter and mesh size of 350μm. The plankton collected from these tows will be then stored in jars. Zooplankton samples will be preserved with 10% formaldehyde, using 20mL for each of the 100mL samples for laboratory analysis and the phytoplankton with Lugol’s solution. The zooplankton samples will be sent to the Plankton Ecology group at IOS, Fisheries and Oceans for species taxonomy. The phytoplankton, nutrient and chlorophyll samples will be sent to the Pacific Salmon Foundation for analysis.

Secchi depth will be determined using a secchi disk to determine the extinction of surface light with depth.

A CTD can be used to measure temperature, pressure, conductivity, dissolved oxygen and fluorescence. At each location, the CTD will be turned on, lowered into the surface water, and held there for two minutes to allow bubbles to escape from the instrument. After, the CTD will be lowered to the ocean floor, where the depth will be recorded. The CTD will be immediately hauled out of the water and turned off. The times when the CTD is switched on, reaches the surface water, touches the bottom, and when it’s switched off will be recorded. We will use 5-L Niskin bottles to measure oxygen, chlorophyll a and nitrate concentrations. The information from the CTD will be sent to Oceans Network Canada.

Upon comparing our results to the study conducted in the 1970s, we hope to better understand species abundance and diversity trends in the Sound and changes in  plankton and ecosystem productivity. This research may further our understanding of how climate change and other anthropogenic drivers impact phyto- and zooplankton abundance and productivity, with potential cascading impacts on the Sound’s marine food web. This baseline inventory and regular monitoring of plankton will inform future development and monitoring studies in the Sound.