The aftermath of the winter storms 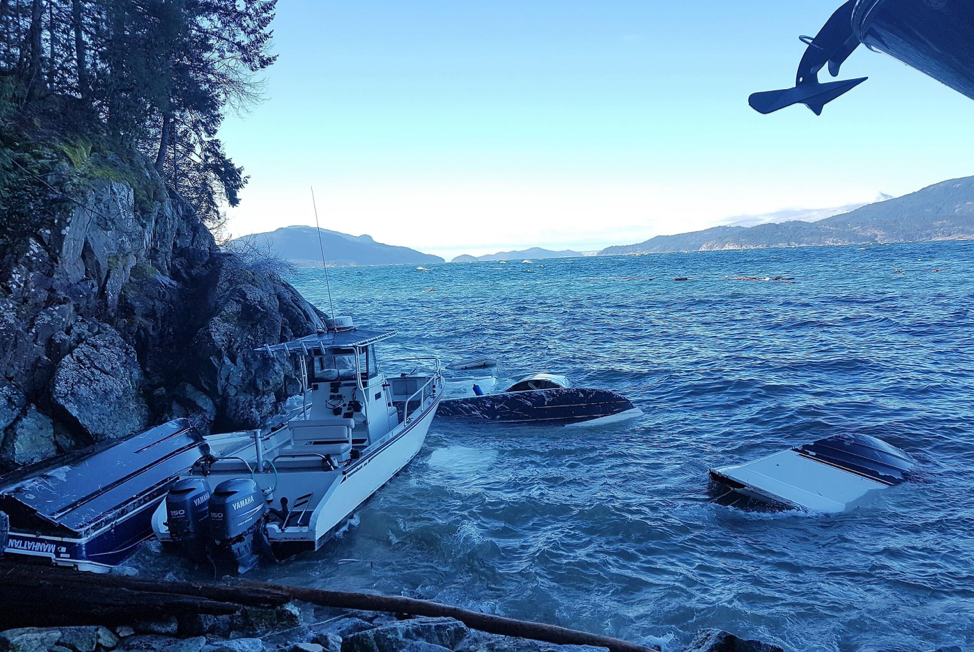 Vessels cast ashore by one of the many winter wind storms in Lions Bay. Photo credit: Future of Howe Sound Society

Squamish is a loose English adaptation of Sḵwx̱wú7mesh, meaning “Mother of the Wind”. With these past winter storms you can imagine why it has that name.

In December 2018 through February 2019, massive windstorms ripped through Howe Sound, knocking over trees and buildings, tearing docks apart, stranding boaters and thrashing vessels around. The storms left the roads a mess, created power outages, took lives and spilt fuel into the water. With the multitude of wind storms this winter, residents and BC Hydro have reported these to be some of the most damaging storms in recent history. The repercussions of these wild storms are still being felt in the fjord.

One example of the consequences these storms had on marine ecosystems is the story of the J.S. Polhemus, which is a 79-foot 1930s tugboat. In December 2018, this boat sunk 100 feet after being thrashed about by 111 kilometer per hour winds. Gas and fuel leaked into Darrell Bay, just south of Squamish, creating a disastrous slick of hydrocarbons in the fjord. These hydrocarbons are toxic to all forms of life. To contain the spill, a containment boom (a temporary floating barrier) was placed by officials in late December. Ropes and other derelict objects that floated off this boat now threaten marine animals such as fish, whales and seals with entanglement. With a history of abandonment, the owner of this boat remains unknown. 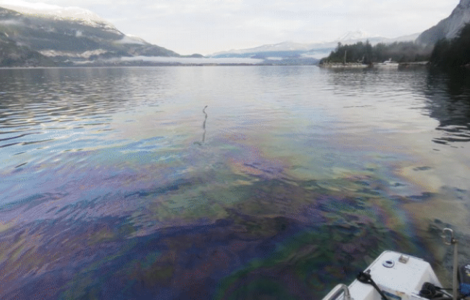 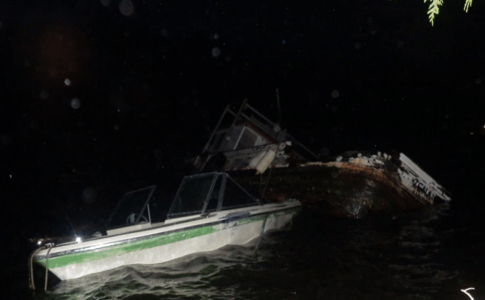 On January 8th, the Coast Guard assessed the five or six sunken and damaged boats in Darell Bay, removing all except the J.S Polhemus. Unfortunately, by the time it was surveyed, the J.S Polhemus had slid down to approximately 350 feet – too deep for removal. According to the Coast Guard, the tug is leaking approximately 10 litres of oil per day in a direction away from the sensitive Squamish estuary. 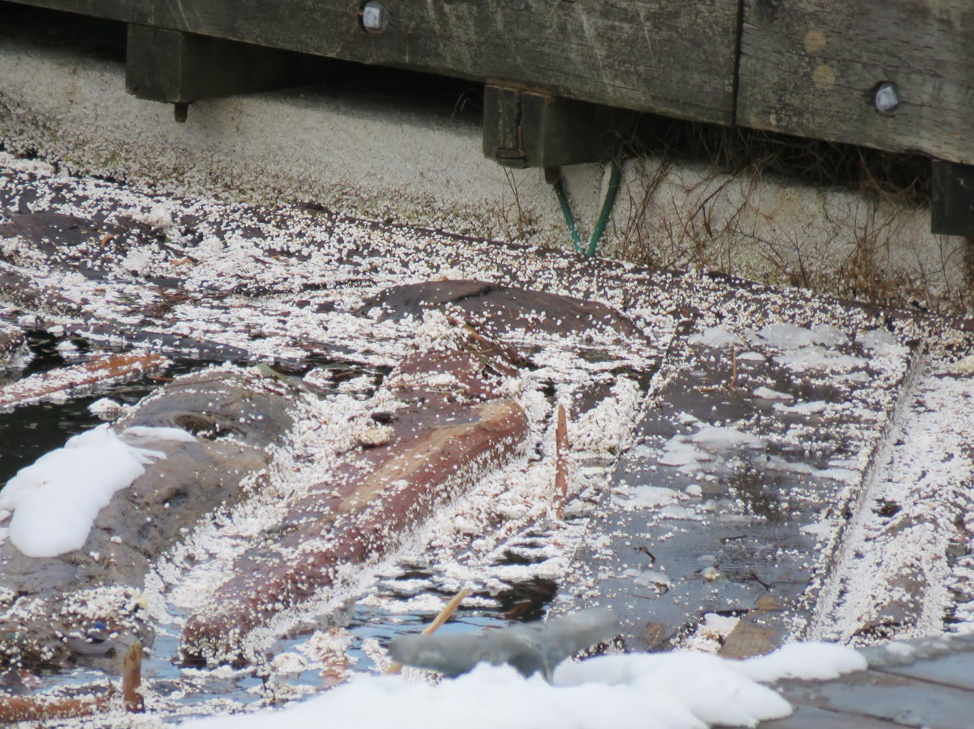 The majority of debris is polystyrene beads breaking apart from docks. This Styrofoam ends up shredded into such small bits, making it almost impossible to clean up. Polystyrene poses a threat to marine life that may starve to death following ingestion. Check out this Global News article on the damage in Horseshoe Bay and the hazardous effects on marine life. Photo credit: John Buchanan at Horseshoe Bay.

On February 9th, arctic outflow winds created further damage in Howe Sound.  In Horseshoe Bay, the entire breakwater barge at Sewells Marina sank during the catastrophic wind storm. This forced boats to crash against each other, pushing some boats up onto the rocks, creating a lot of damage. The worry is that without their breakwater the marina is exposed to future high winds. A temporary breakwater was put in place to allow for cleanup and remediation efforts.

To understand ways Howe Sound’s community can address this damage and prepare for similar catastrophic events in the future, a group of Howe Sound residents and conservationists met to plan the logistics for a Howe Sound wide clean up. Ruth Simons, executive director of the Future of the Howe Sound Society says, “Major damage at eight or more locations arounds the Sound has put our wildlife at risk and caused pollution no doubt in sensitive habitat areas.” 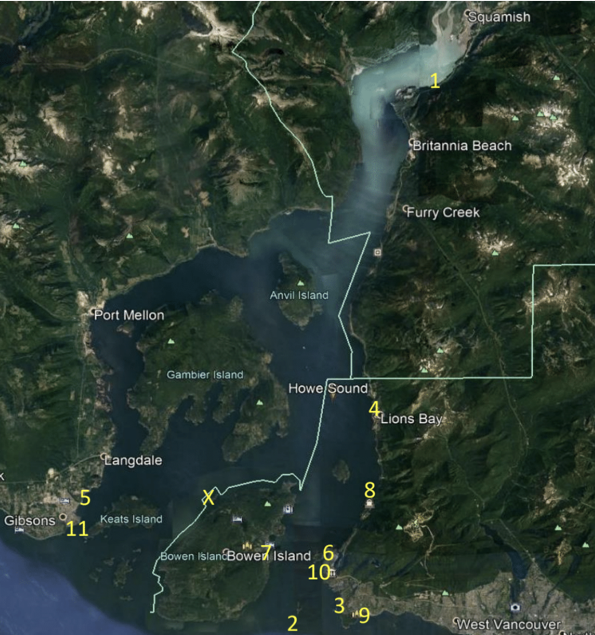 Eleven locations that experienced significant damage due to the winter storms.

Communities around are rallying to participate in a Howe Sound wide cleanup, which will occur the week of April 8-14 with most activities occurring on the weekend of the 13-14th. The Squamish Estuary clean up is set for Sunday April 14th 2019 at 10:30 at Nexen/Newport Beach. Everyone is welcome to come help out and clean up our beach areas! For more information on dates and logistics associated with the Squamish Estuary clean up sign-up HERE or contact Bridget John (bridgetmaryjohn@gmail.com).

We are also creating an  open online map to track debris in the Sound that needs to be picked up or pulled away. Feel free to insert any locations that you have seen!

In 2017, the Abandoned Boats Program (ABP) was announced by Transport Canada to support communities with removing and disposing derelict vessels posing a safety, environmental and/or economical risk. Following the guide, if a derelict boat is found it must be hoisted with all debris removed in order to apply for ABP funding. Under the Oceans Protection Plan, the federal government will reimburse a maximum of $5,000/boat for removal assessment and $50,000/boat for removal and disposal. The program also aims to educate and support research on boat recycling and environmental boat design. *** The third call for assessment and removal project proposals is open until March 31st 2019 ***.

On an interview with CBC, the Canadian Coast Guard Environmental Response superintendent, Jeff Brady, reminded boat owners that prevention is key to help protect the Howe Sound marine environment. Great work to those volunteers and the Coast Guard who have spent their time cleaning up after the storms.

← How Can We Better Protect Our Beloved Sebastes? Glass Sponge Reef Protection in Howe Sound →
About Us    Resources    Team    News    Get Involved    Contact Us