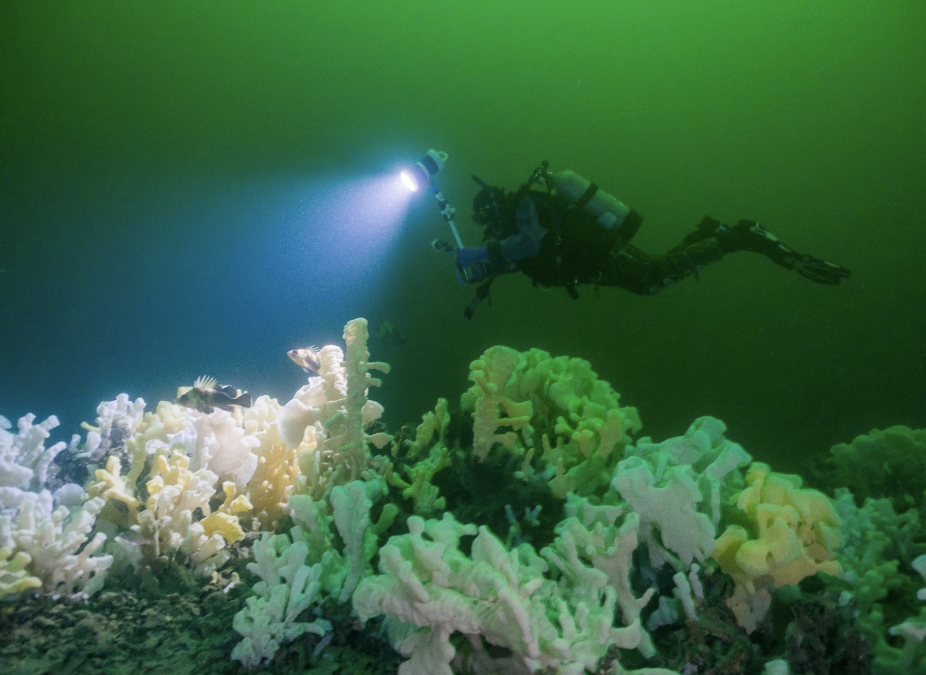 Underwater oases of 500 million year old reefs made out of glass sponges in the Howe Sound have become protected by the Department of Fisheries and Oceans Canada. 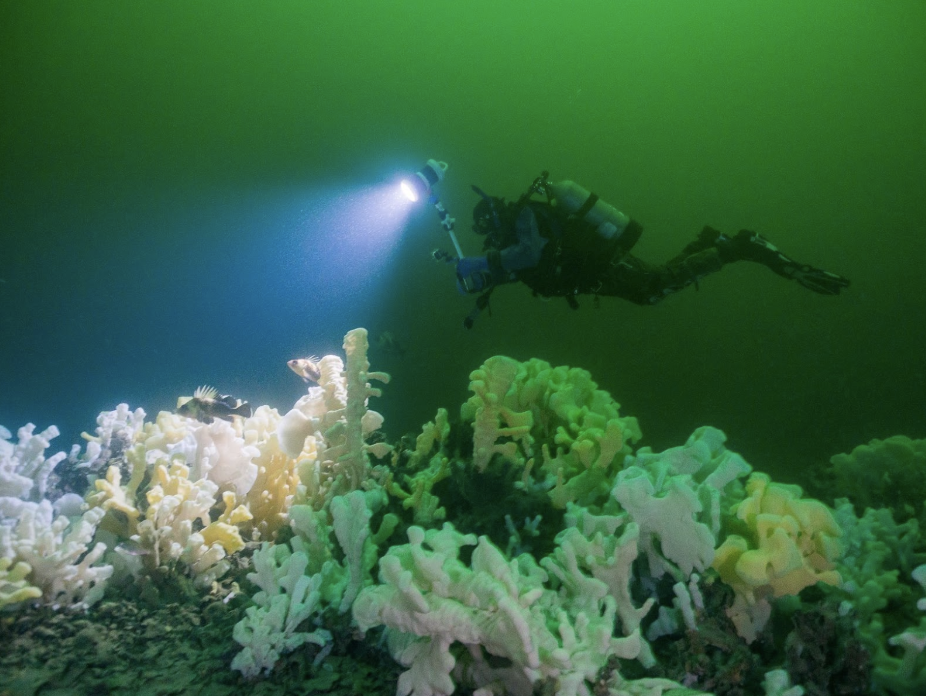 Halkett glass sponge reef in Halkett Provincial Park, which the province of BC expanded to help protect the reef. Diver in the image is Glen Dennison of Marine Life Sanctuary Society of BC who discovered and documented 8 of the 9 reefs recently protected. Photo taken by Adam Taylor.

With summer coming to an end, the fishing season is still in high force. People partaking in commercial, recreational and/or Indigenous fishing should be continually aware of the ban following the locations of eight new refuges in the Sound aimed to protect nine 500 million year old glass sponge reefs concealed in its depths. 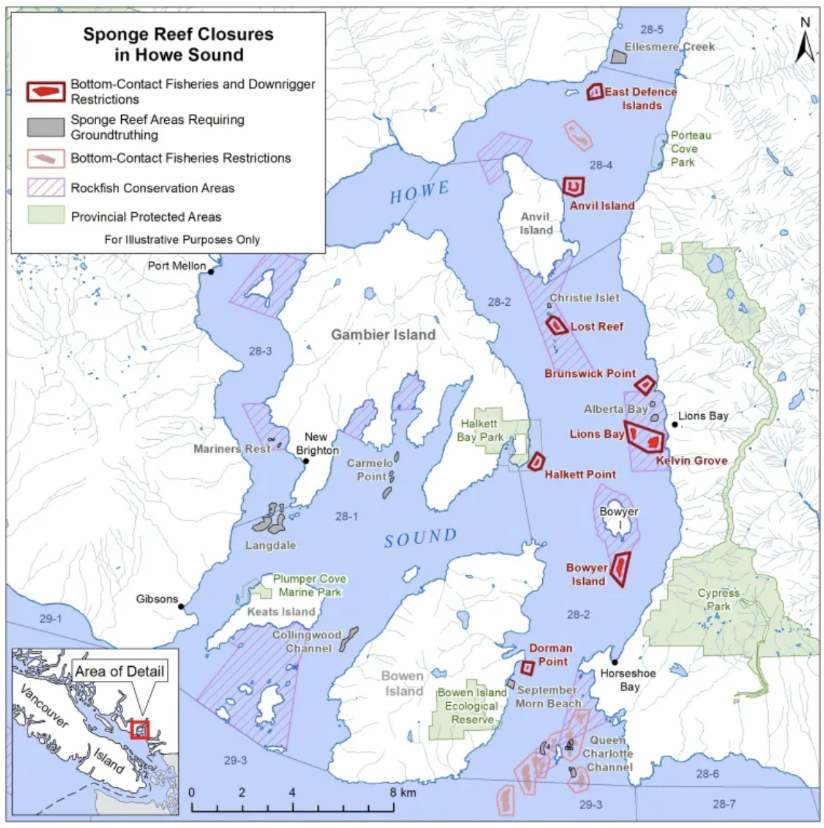 Eight different refuges have been created to protect nine sponge reefs in the Howe Sound from damage due to fishing. Picture from DFO.

Rockfish, prawns and other creatures use these glass sponge reefs as nurseries. For example, with rockfish being extremely sensitive to fishing because of their closed swim bladder, sedentary behaviour and being slow to reproduce, it’s important to allow these nursery areas to thrive as, in the long run, it will help the fishing industry.

Glass sponge reefs have a vital role in linking benthic and pelagic environments. DFO explained that the glass sponge reefs filter more than 17 billion litres of water per day, filtering the seawater for the bacteria that nourish them and expelling the nutrients that contribute to photosynthesis of marine plants.

Support for these glass sponge reef protection areas has come from First Nations, the commercial fishing industry and many organizations surrounding the Sound.

In the last couple hundred years these reefs have been damaged from fishing, development, warming water temperatures above 11°C, anchoring and potentially industrial contamination. These glass sponge reefs are vulnerable to any sediment that is stirred up in the water column as they are porous and very fragile.

These animals build their skeleton out of silica or glass and grow 2 to 7 cm/year, whereas a moderate growth rate of a conifer tree is 30 to 61 cm/year. In a news report Glen Dennison, the Marine Life Sanctuaries Society director said, “The largest glass sponge reef I’ve seen in the Howe Sound is 800 by 300 feet across.” This is equivalent to the area of over seventeen olympic sized swimming pools placed side by side on the ocean floor. 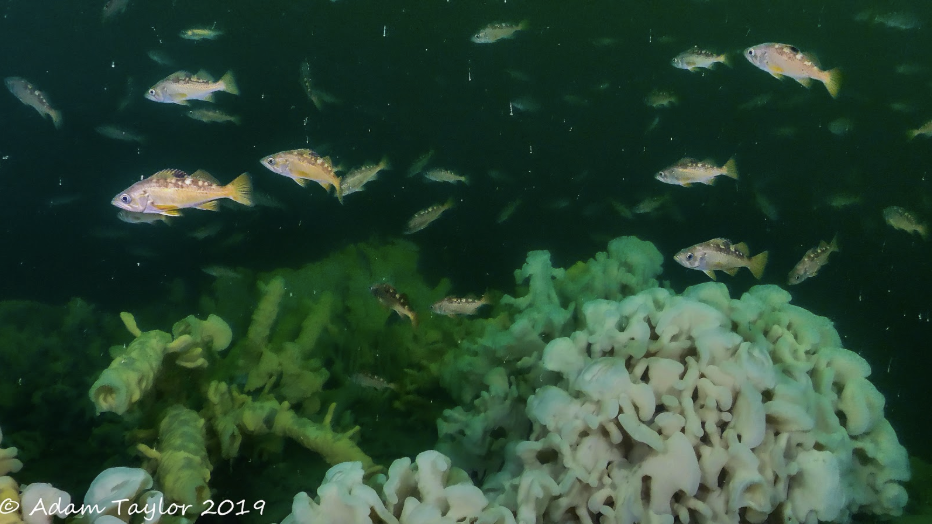 Pictured is a sub-adult Yellowtail Rockfish schooling over a glass sponge reef.

Sponge reefs are only found in the Pacific Northwest, scattered amongst the British Columbian and Alaskan coastline. They haven’t been discovered anywhere else in the world. Glass sponge reefs were thought to have gone extinct 37 million years ago. However, Canadian scientists re-discovered them in 1987 and the first sponge reef became protected in 2015.

The Marine Life Sanctuaries Society, with a goal of protecting threatened marine life for the benefit of future generations, played a vital role in these sponge reef discoveries and research and pushed the federal government forward to create these protected areas.

As humans we’ve discovered less than 10% of the oceans. Let’s be mindful of our oceans teeming with life and remember that it’s not a resource, but life.